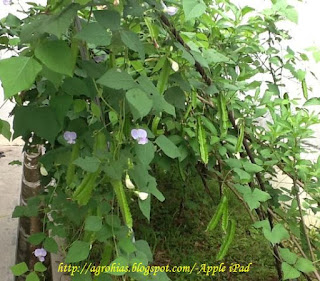 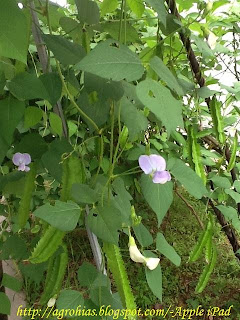 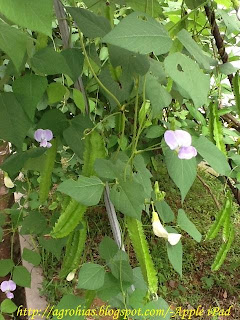 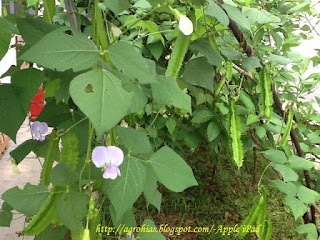 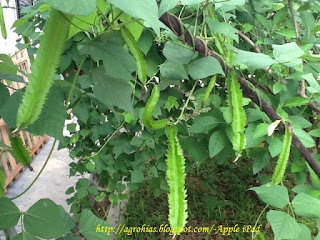 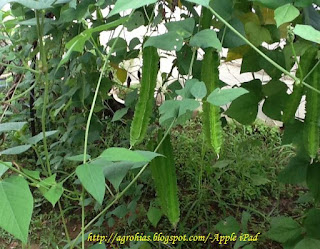 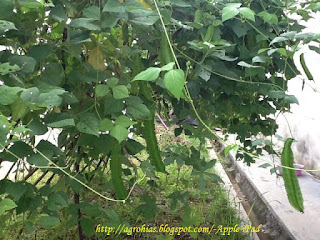 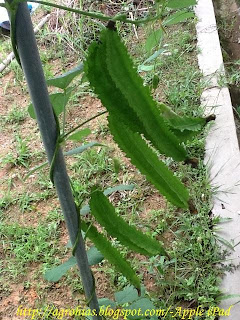 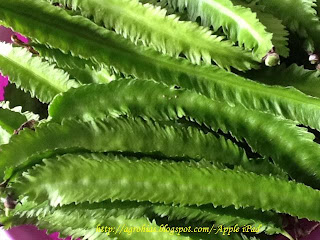 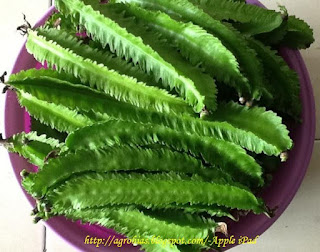 From Wikipedia, the free encyclopedia
Jump to: navigation, search
Not to be confused with Lotus tetragonolobus.
The Winged bean (Psophocarpus tetragonolobus), also known as the Goa bean and Asparagus pea, Four-angled bean and Winged pea, is a tropical legume plant native to New Guinea. It grows abundantly in hot, humid equatorial countries, from the Philippines and Indonesia to India, Burma, Thailand and Sri Lanka. It does well in humid tropics with high rainfall. There are also varieties that can be grown in most areas of the U.S..
The winged bean plant grows as a vine with climbing stems and leaves, 3–4 m in height. It is an herbaceous perennial, but can be grown as an annual. It is generally taller and notably larger than the Common bean. The bean pod is typically 15–22 cm (6–9 in) long and has four wings with frilly edges running lengthwise. The skin is waxy and the flesh partially translucent in the young pods. When the pod is fully ripe, it turns an ash-brown color and splits open to release the seeds. The large flower is a pale blue. The beans themselves are similar to soybeans in both use and nutritional content (being 29.8% to 39% protein).
The plant is one of the best nitrogen fixers[citation needed] with nodulation accomplished by the soil bacterium Rhizobium.[citation needed] Because of its ability to fix nitrogen from the atmosphere, the plant requires very little or no fertilizers.
Being a tropical plant, it is sensitive to frost. Most plants will not flower if the day length is more than 12 hours, meaning they will not produce pods in most temperate zones, although day length neutral cultivars do exist. The seeds have a hard coat and it helps to soak them before planting to hasten germination. The plant grows very quickly, reaching a length of four meters in a few weeks.

This bean has been called the "one species supermarket" because practically all of the plant is edible. The beans are used as a vegetable, but the other parts (leaves, flowers, and tuberous roots) are also edible. The tender pods, which are the most widely eaten part of the plant (and best eaten when under 1" in length), can be harvested within two to three months of planting. The flowers are often used to color rice and pastries. The flavor of the beans has a similarity to asparagus. The young leaves can be picked and prepared as a leaf vegetable, similar to spinach. The roots can be used as a root vegetable, similar to the potato, and have a nutty flavor; they are also much richer in protein than potatoes. The dried seeds can be useful as a flour and also to make a coffee-like drink. Each of these parts of the winged bean provide a source of vitamin A, vitamin C, calcium, iron, and other vitamins.[1] The seeds contain 35% protein and 18% oil.
Dicatat oleh Tokanpuakajoran® Cikgu Budr di 5:13 PTG 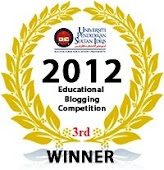